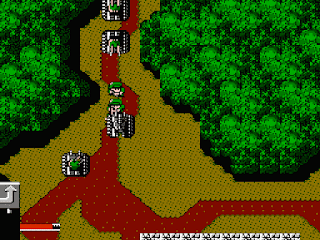 Genre: Action
Perspective: Top-down
Gameplay: Arcade
Vehicular: Tank
Setting: Historical events, World War II
Published by: SNK Corporation of America
Developed by: SNK Corporation
Released: 1988
Platform: Nintendo (NES)
According to the plot of the game, in 1944 the United Forces is preparing the final assault on the coast of Normandy. In this operation, we take control of a commando named Paul, codenamed "Iron Snake" (in the Japanese version, his name was Colonel Ralf, who was also the main character in "Ikari Warriors"), who, driving a tank, must infiltrate the German the citadel and destroy the enemy's headquarters. To succeed in his mission, Paul will need all the firepower of the most powerful war machine - the iron tank.
Iron Tank: The Invasion of Normandy is played from a top-down view with a game screen that scrolls in all directions. After landing our tank on the beach, we begin a gradual advance into enemy territory, destroying various enemies and military equipment: foot soldiers, tanks, cannons, trains, submarines, boats, planes, and more. In addition to destroying the enemy, in order to successfully complete the game during the mission, we will need to rescue captured soldiers.
Like most shooters like this, Iron Tank: The Invasion of Normandy is divided into several levels with bosses at the end of each. But, nevertheless, the gameplay here is continuous - there is no obvious division into levels, and after defeating the next boss, the game simply continues on. One of the unique moments that sets this project apart from other similar shooters is the player's ability to choose their own path to the last level. Some of the paths are shorter, but more difficult to pass, while others are much easier to pass, but you will spend much more time on passing. The paths in the game converge and diverge at certain points, allowing us to get various combinations of levels on the way to achieving the main goal.
The bosses in the levels are quite varied and are usually very well armed. These can be, for example, giant tanks, railroad artillery, fortresses or aircraft. Most of them have some degree of movement in one or two directions, as well as a fairly predictable system of behavior.
"Iron Tank: The Invasion of Normandy", according to many critics, became the predecessor of the later game "Guerilla War" ("SNK", 1987), since they have very similar gameplay, graphics and level structure, and the main difference is only in the main character (tank and commando on foot).
‹
›
Home
View web version