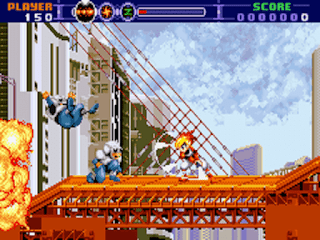 Genre: Action
Perspective: Side view
Art: Anime / manga
Gameplay: Arcade, Shooter
Setting: Sci-fi / futuristic
Published by: SEGA of America
Developed by: Treasure Co.
Released: 2005
Platform: Game Boy Advance (GBA)
This game is in some ways an independent project, and in some ways a variant of the SEGA game Gunstar Heroes. We now have a choice of two characters, which is a blue-haired guy and a red-haired girl. Unfortunately, there is no way to combine weapons in the game like in the original. The game persists between stages, but does not replenish health between stages, which makes it difficult. By the way, don't miss the opportunity to play in full screen. Here it will be without blurring! Recommended for fans of difficult action games, for the rest we can recommend Metal Slug Advance.
‹
›
Home
View web version