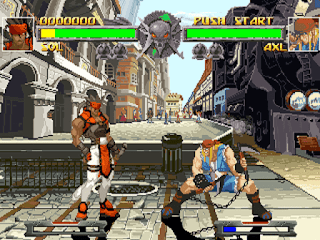 Genre: Action
Perspective: 3rd-person, Side view
Art: Anime / manga
Gameplay: Fighting
Published by: Atlus Software Inc.
Developed by: Team Neo Blood
Released: 1998
Platform: PlayStation (PSX, PS1)
Guilty Gear is a 2D fighting game in which the player is given the opportunity to choose one of ten characters and fight in the arena with an opponent from among the same characters, which differ greatly in both appearance and fighting style. You can play both against a human opponent and in single-player mode - against a computer. The object of the game is solely to defeat the enemy during a three-round battle.
Since its US release, Guilty Gear has received positive reviews from several gaming magazines. Critics noted the graphics, stylized as anime, and the unusually beautiful and neat design of all game elements for that time, which did not require a lot of memory to display. The originality and relative dissimilarity of Guilty Gear with the games of Capcom and SNK, which dominated the field of fighting games, received a separate assessment. However, the balance in Guilty Gear left much to be desired: some characters were significantly superior to others in their capabilities. Overall, the game was rated average, but has potential for development and improvement.

After choosing one of the available characters, the player is invited to defeat the enemy in battle, winning two rounds out of three. Against the opponent, you can use blows of varying degrees of power, throws and combinations of blows (combos) performed by movements of the joystick and pressing the control buttons. Characters can be unarmed or have melee weapons, firearms and throwing weapons. Nevertheless, some characters are capable of throwing various objects or energy clots at the opponent. Before the start of the battle, the player can choose only one character and has no right to change him either during a round or between rounds. You can choose another character only after the end of the battle, which takes place on an absolutely flat arena that does not have any ground or air obstacles. Characters can only move within the width of the arena and only within certain limits. This circumstance makes it possible for the player to pinch the enemy in a corner - the worst place, since maneuverability in the corner is sharply reduced.

Guilty Gear allows you to choose one of three modes: Versus Mode (against a person), which makes it possible to play against another player; Normal Mode (arcade mode) - a single mode, ending with two battles with bosses, and the only one in which the plot of the game is revealed to one degree or another; and Training Mode, which allows you to practice individual moves and combos on a stationary opponent. The game settings allow you to set the duration of a round, but do not allow you to change the number of rounds in a battle and the difficulty of completing a single-player mode.

Whichever character the player chooses, he and his opponent will start the round with the same amount of health, but since the characters differ in sensitivity to attacks, the life bar (always at the top of the screen) for some fighters dries up faster than others.
Guilty Gear is a four-button fighting game, which means that four buttons are used to execute basic attacks that the characters wield. In most games of this type, two buttons are responsible for punches of different strengths, the remaining two are for kicks. In Guilty Gear, almost all characters are armed, so the buttons are distributed differently: punch (P - Punch), kick (K - Kick), weak swing of the weapon (W - Weak Slash), strong swing of the weapon (H - Heavy Slash) ... It is important to note that weapons are not included in the game's combat system: they cannot be broken, thrown or picked up, they are used solely to diversify the animation of moves. Unarmed characters, when pressing the W or H buttons, perform alternate punches or kicks.
In addition to standard attacks, all characters at close range from the enemy are able to perform throws, all have a universal technique - the so-called launcher (in subsequent games converted to Dust mechanics), which lifts the opponent high into the air and allows them to jump up after them in order to deliver several blows to the helpless the enemy. All characters have a normal, high and double jump (they can jump a second time in the air), most are able to dash on the ground (Dash) and in the air (Air Dash). The game has the ability to tease the enemy, forcing his character to say something offensive to the opponent, or, on the contrary, to express respect for him. These actions are called respectively Chouhatsu, and the Chouhatsu action is assigned to a separate button, while Respect is assigned to one button with the Charge action (see below). However, since the game is dubbed in Japanese (the dubbing is preserved in the English version), the teaser can only be effective against a human player who understands Japanese: the computer does not respond to it.
Each character has several unique special moves that can be used as part of a combo; almost all of the characters have one Charge Move among the above-mentioned moves. For "charged" techniques, you can initiate the process of accumulating energy in a special scale that appears during charging above the energy scale. The command used by each character for this action is the same as the one used to perform the "charged" move. The more energy has been accumulated, the more powerful the "charged" move will turn out the next time the player wants to perform it.
In addition to special moves, all characters use the so-called Chaos Move, which are very close to the usual super moves in fighting games. They can be completed if there is a full energy scale (called the Chaos Meter in the game, respectively), which is constantly at the bottom of the screen and fills up during the battle (it does not carry over between rounds) or when the character has less than half of the total health.
A feature of Guilty Gear, rarely seen in other games, is the techniques that allow you to instantly kill the enemy, no matter how much health he has left - Ichigeki Hissatsu. However, players have repeatedly criticized Guilty Gear for being too easy to perform these moves, and for losing the entire fight at once. In subsequent games, the developers took into account the criticism and revised the mechanics in the direction of increasing the risks when using it.
The block in the game is done by pressing the direction "back" on the gamepad, the main blows when hitting the block do not cause damage, special and super moves - cause Chip Damage. This damage can be negated by using the Fauntless Defense, carried out by pressing the Respect button during the block and consuming energy stored in the scale for Chaotic moves.

Guilty Gear is set in the world of the future, circa 2180. At the beginning of the XXI century, people began to research magic and found that it is a source of energy of incredible power. Soon it was possible to transform biological objects, both people and animals, using magic, turning them into the so-called Gears. After the transformation, most Gears lost their free will, which made them completely dependent on the will of the command-type Gear. After Justice became the leader of the Mechanisms, whose only goal was to destroy people, the Mechanisms subordinate to her turned against humanity, starting a century-old world war called the Crusades. Members of the Holy Order, which included Kliff Undersn, Sol Badguy, and Ky Kiske, defeated Justice, who was then imprisoned in an interdimensional prison. The rest of the Mechanisms, not having a free mind, in the absence of the commander ceased to pose a threat, and the war with them ended.
Five years after the end of the war, the Testament Mechanism, retaining free will, began a plan to free Justice from prison. Alarmed by this circumstance, the United Nations announced the beginning of a tournament, the purpose of which was to identify fighters capable of dealing with the rebellious enemy. Sol Badgay, who left the Sacred Order and became a bounty hunter, defeated Testament in a duel and killed Justice, finally eliminating the threat of a new war.

Basic - 10 characters-fighters, available to choose from the very beginning of the game.
Bosses - 2 bosses encountered by the player at the last levels in single player mode (Arcade Mode). Bosses become available for selection if you complete the single-player mode for any of the main characters.
Secret - There is only one secret character in the game, Baiken. To be able to play as Baiken, you need to complete the single-player mode as the main characters of Sol or Kai without losing a single battle.
‹
›
Home
View web version