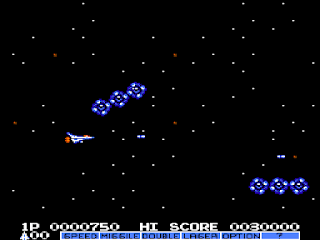 Genre: Action
Perspective: Side view
Visual: 2D scrolling
Gameplay: Arcade, Shooter
Setting: Sci-fi / futuristic
Published by: Konami Co.
Developed by: Konami Co.
Released: 1988
Platforms: Nintendo (NES), Sharp X68000
Gradius II retains the basic gameplay features of the original game, but also includes many enhancements from the Salamander spin-off (1986) and the Japanese release of the arcade Life Force. This is primarily manifested in the two selectable weapon configurations, as well as the inclusion of levels such as "Boss Rush" (also known as "boss parade" or "boss alley"), in which fights are fought exclusively with bosses.
As in its predecessor, in the second part, you can collect bonuses from killed enemies and independently choose which type to use and when to do it. In "Gradius II" there is a significant innovation in the gameplay, allowing before the start of the game to choose one of four different systems of pumping the ship (each of them is unique), allowing us to use certain types of weapons and improvements as we progress. There is also an opportunity to get special protection - mysterious fireballs that fly around our ship and imitate all its movements (including shots). The game has gone beyond the narrow strip of the moving screen, and now there are large levels where you can move far up and down. At the same time, some of the enemies became noticeably larger and more terrible.
The game "Gradius II" is quite unique, as it simultaneously displays a lot of enemies and the projectiles they launch on the screen. It's impressive that the Konami programmers did it with almost no flicker or lag, which was a breakthrough for the time. The graphics of the game are quite detailed, the animation is smooth. The music in the second part is much better than in the original, and much higher than the level of other space shooters. Compared to the first part, here you can feel the real shooter frenzy, which is simply impossible to describe in words - it is better to start the game and play for a few minutes to understand what I mean. Gradius II is a real arcade bomb!
Do not be confused by the lower ratings compared to the original - the game was released only in Japan, and many Western critics and players simply did not play it. The game is worth the most flattering words, don't miss it! 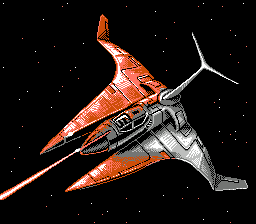