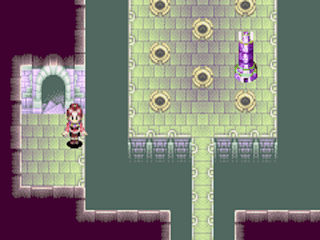 Genre: Role-Playing (RPG)
Gameplay: Puzzle elements
Setting: Fantasy
Published by: Nintendo of America Inc.
Developed by: Camelot Software Planning
Released: 2003
Platform: Game Boy Advance (GBA)
The player takes on the role of a magic-capable "Adept" named Felix. He and his allies are looking for a way to bring magical Alchemy back to the world of Weyard. In their adventures, the heroes fight monsters, discover new places, help the local population, and also find Djinn, which give them an increase in their strength.
Upon release, Golden Sun: The Lost Age was generally well received by critics, although many publications noted that the game was not as good as the previous Golden Sun. However, IGN named Golden Sun: The Lost Age the eighth best Game Boy Advance game of 2003 and the 22nd best GBA game of all time. In total, more than 680,000 copies have been sold.

The gameplay of the game is similar to the previous game Golden Sun. The player controls a group of heroes who travel through the fantasy world, interact with other characters, fight monsters, acquire new spells and equipment. The game has a linear plot, but at the same time, the player is given the opportunity to selectively complete some side tasks.
Most of the game time is spent in battles that start on the world map or in dungeons, caves, and other locations. Unlike the previous game, where the player explored the game world, moving mainly by land, in Golden Sun: The Lost Age, the player is given control of a magical ship, on which he visits continents and islands, which takes up most of the game time. The player will have to solve various puzzles, which include, for example, moving stone pillars to the desired positions to create a path across the abyss, ascending and descending stairs on the rocks. The player must also look for items necessary for further progress in the plot, which usually include artifacts that give the owner the opportunity to use psynergy (a form of magic in the game). Without them (and, therefore, without a certain psynergy), it is often impossible to get to the right place.
In many role-playing games, forms of magic are usually divided into offensive and auxiliary forms. In Golden Sun: The Lost Age, psynergy spells are also actively used in solving puzzles in dungeons and exploring territories. Some types of psynergy are available for use only in combat, while others, on the contrary, can only be used outside of it. The game also contains spells that have multiple uses; for example, the Frost spell deals damage to the enemy in combat, and also freezes water puddles, turning them into columns of ice that can be used as a ferry. Psynergy is based on four elements, which are: Venus (control over the earth and plants), Mars (control over fire and heat), Jupiter (control over wind and electricity), and Mercury (control over water and ice). Improving the skills of the characters during the game, as well as collecting magical items, the player gets a new, more powerful psynergy. The player can eventually return to the previous location and solve a puzzle that required the use of a certain spell.

One of the main features of Golden Sun: The Lost Age is the ability to find and control magical Djinn. They can be found all over the world. For each of the four elements, there are 11 Djinn that can be given to any of the characters. Djinn form the basic characteristics of the heroes and determine what kind of psynergy they can use. The attachment of various Djinn to a character determines his class, the psynergy that is available to him, and also increases the maximum hit points, psynergy points and other characteristics.
The genie, being at the disposal of the character, can be in the "Set" mode, the Standby mode or the Recovery mode. While in readiness mode, the Djinn has a direct impact on the character's class, its characteristics and psynergy (which depends both on the Djinn and on the element of the character itself). In battle, the player can control the Genie. Each Djinn has its own special ability that is used in combat: attack with an element, casting / removing a spell, healing, and other effects. After a single use, the Djinn goes into standby mode, in which it ceases to influence the character, but can be used to summon powerful elemental creatures. After summoning a creature, the Genie goes into recovery mode, which lasts several turns, and then it becomes available again in battle. A total of 29 creatures can be summoned in Golden Sun: The Lost Age; 16 of those that were in the previous game, and 13 new ones, for which the player first needs to find special signs located in the dungeons.
There are 72 Genies in the game, which can be freely distributed among eight characters, providing them with a wide range of classes and various fighting techniques.

The game is set in a world called "Weyard", which is based on the concept of a flat earth; it is a large world in the form of an uneven circle, whose oceans overflow from the border into an endless abyss, and no one knows what is behind it. Towards the end of the game, a large black hole appears in the far north of Weyard. The player will have to visit continents, islands and oceans, including Angara and Gondowan - two large continents where the action of the previous game took place. All matter in the world consists of some combination of four basic elements: Venus, Mars, Jupiter and Mercury. These elements are subject to the Adepts, one of whom are the main characters.

For a significant part of the game, the player's team consists of four characters:
Also traveling with the team is the aged and wise scientist Kraden, who was previously taken hostage by Felix with Jenna and Sheba. Now that the player takes on the role of Felix, he must complete the work of Saturos and Menardi to return Alchemy to Weyard.
Felix is still pursued by the heroes from the first Golden Sun game under the leadership of Isaac, a young Adept of Venus, who previously followed him around the world and tried to stop him, believing that Alchemy is a potentially destructive force and is capable of destroying Weyard. Alex, a former companion of Saturos, joins a pair of powerful Mars Adepts called Karst and Agatio. Together, they track Felix, hoping that he will be able to complete his plan and return Alchemy.

The game continues the storyline of the previous Golden Sun. Saturos and Menardi fell in battle against Isaac and his friends, but still managed to illuminate two of the four Beacons of Elements. And now Felix, a former companion of Saturos, sets out on his own journey to complete the work he started and illuminate the two remaining beacons, which will ultimately lead to the return of the powerful Alchemy to Weyard. Cruising the oceans with his new friend Pierce, Felix visits various parts of the world, but Isaac's squad is still pursuing him.
During their wanderings, Felix's team manages to get to Lemuria, a legendary sea city isolated from the outside world. They seek to meet with the King of Lemuria Hydros and learn from him about the true nature of Alchemy; it turns out that she has always been the lifeblood of Weyard, and her absence led to the territorial reduction of continents and the complete disappearance in the abyss of some parts of the world.] Convinced that the return of Alchemy is necessary to save the world, Felix proposes to go to the Lighthouse of Jupiter and illuminate it ... But Isaac's team comes there and falls into a trap prepared by Karst and Agatio, who want to avenge the death of Saturos and Menardi. Felix, who appears here, helps Isaac defeat opponents.
Felix finally manages to explain to Isaac that the release of Alchemy is necessary to save the world, and that Saturos and Menardi tried to achieve this only in order to save their hometown of Prox, located in the north of Weyard near the Mars Lighthouse. The heroes join forces, and now a single team of 8 people hit the road to ignite the Mars Lighthouses. When they reach the top of the lighthouse, the Sage appears in front of them, who once instructed Isaac to prevent the unsealing of Alchemy. He warns that humanity could very easily destroy Weyard if given such a powerful power. Isaac insists that the seal must be broken, the Sage summons a giant three-headed dragon in response, and the heroes engage in the final battle.
Having defeated the dragon, the Adepts see that the parents of Isaac and Felix were turned into this monster by the Sage. They are in grief for some time, they still decide to light the lighthouse. All four towers are now illuminated and emit their energy towards the Mount Aleph shrine, where Alex is already located. He wants to get a tremendous power emanating from the product of Alchemy - the light of the Golden Sun. But unfortunately for him, the mountain collapses and goes underground while he is still standing on the top. Meanwhile, the Adepts see that their parents have been resurrected with the return of Alchemy, as the Sage originally planned. Heroes Find Out the Truth - The Sage started this cruel game in order to test their strength as Adepts, and find out if they are capable of taking on a great responsibility - to become a guarantee that the reborn Alchemy will not lead to its abuse by the inhabitants of Weyard, as it happened ancient times. The game ends when the Adepts and their parents return to their home village of Veil and see that it was destroyed by the energy that expired from the destruction of the seal of Alchemy, but all the inhabitants survived, because the Sage warned them of the impending danger.
‹
›
Home
View web version