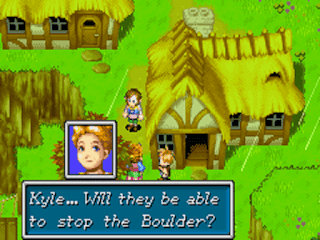 Genre: Role-Playing (RPG)
Perspective: 3rd-person, Top-down
Visual: Isometric
Gameplay: Puzzle elements
Setting: Fantasy
Published by: Nintendo of America Inc.
Developed by: Camelot Software Planning
Released: 2001
Platform: Game Boy Advance (GBA)
A distinctive feature of the game is the use of special magical creatures by the characters - Djinn, which increase the parameters of the characters and can be used against enemies.

The player controls a team of four, travels the world, interacts with other characters, fights monsters, acquires new abilities and equipment. And although many of the player's actions are required to complete the story, the game has the ability to visit previous locations and complete tasks that are not related to the main plot.
The player spends a lot of time in dungeons, caves and other places where he has to fight against oncoming monsters. In addition, locations usually have puzzles that require the player to complete some sequence of actions, such as creating a river crossing using one or more logs or driving a minecart to access the depths of the mine. Some puzzles may require the use of psynergy (a playable form of magic), which is a distinguishing feature from other RPGs, where magic is usually used only in combat or outside of it for healing. Here, some combat spells can be used outside of combat; for example, the Whirlwind spell deals damage to the enemy in combat and can clear paths overgrown with bushes. Psynergy is based on four elements, which are: Venus (control over the earth and plants), Mars (control over fire and heat), Jupiter (control over wind and electricity), and Mercury (control over water and ice). The player can return to the previous location and solve the puzzle that previously could not be solved due to the lack of the corresponding spell.

The game features random encounters with monsters that take place in open areas or in dungeons, and boss fights. When the battle begins, a special battle screen appears, where the player's characters face their opponents. During the battle, the screen rotates, which creates the illusion of a 3D effect. The player must destroy the enemies by any available means and prevent the death of the entire team (for which you can use healing items and restorative psynergy). The game will end if the hit points of all characters reach zero; if this happens, the player will lose money, and the group will end up in the church of the last visited city. In case of defeating enemies, the player receives experience points, money and, sometimes, useful items.
The game also has an additional combat mode available from the main menu. In it, players can unite in teams and fight opponents in the arena. The difficulty of each such fight is constantly increasing. In addition, players can choose three out of four characters and fight each other. In case of victory in such battles, the player does not receive any reward.

One of the distinguishing features of the Golden Sun game is the search, taming and control of special magical creatures called Djinn. Djinn are scattered throughout the game world, they can be given to any of the heroes. On their basis, a change in characteristics is formed, as well as psynergy available to characters. Depending on which Djinn and in what quantity were given to the character, the character's class is determined, which affects the hit points, psynergy points and other characteristics, as well as the psychic energy that the hero can use.
The genie, being at the disposal of the character, can be put into the Set mode or the Standby mode. In readiness mode, the Djinn gives the character an increase in characteristics, can change his class and available psynergy. The Djinn is also available in battle for attack, healing and other purposes (depending on the specific Djinn). At the same time, using the Djinn in battle once puts him into standby mode. In total, seven Djinn are available in the game for each element, that is, there are 28 of them in total. In certain combinations, they present the heroes with a wide range of classes and combat skills.
In battle, the player has several options for using the Djinn. Each Djinn has a special ability that can be used in battle. This includes attacking with a specific element, casting / removing spells, healing, restoring status, and other effects. After summoning, the Djinn goes into standby mode and ceases to affect the characteristics and classes, but can be used to summon powerful elemental creatures that inflict great damage on the enemy (the more Djinn were summoned, the more powerful creature can be summoned). This is the most powerful attack in the game, however, after a single call, the Djinn takes some time to rest, after which he goes back to ready mode. For each element, you can summon 4 elemental creatures (there are 16 in total).

The game Golden Sun is set in the fantasy world "Weyard". It is a large, Earth-like world with several continents and oceans. That being said, as explained in the sequel Golden Sun: The Lost Age, the setting is based on the concept of a flat earth; the game world is flat, has the shape of an ellipse, and the oceans overflow from the border of the world into an endless abyss. The history of the game Golden Sun is set on the two largest continents of the central region, which are called Angara (northern continent) and Gondovan (southern continent).
Weyard obeys legendary core elements. All matter in the world consists of a certain combination of four elements: Venus (earth), Mars (fire), Mercury (water) and Jupiter (wind). Elements can obey only the opposite force - Alchemy, which has reigned in the world since ancient times. Subsequently, Alchemy was sealed, and the real world, it would seem, is devoid of this power. However, in various places around the world, people have appeared who have the ability to control one of the elements with the help of magic, which is called psynergy. These owners of psynergy, called Adepts, usually refrain from showing their abilities to outsiders.
‹
›
Home
View web version