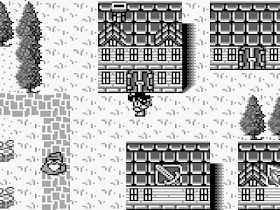 Genre: Role-Playing (RPG)
Perspective: Top-down
Pacing: Turn-based
Setting: Fantasy
Published by: Square Soft
Developed by: Square Co.
Released: 1993
Platform: Game Boy
The basic elements of the gameplay remained the same, although this time the development was led by newcomer Chihiro Fujioka, who, along with Ryuji Sasai, also took part in writing the music for the soundtrack. A significant difference from the previous parts was the flexible system for choosing character classes. If earlier the specialization had to be chosen at the very beginning, and throughout the game it remained unchanged, now the heroes can change the class at any time by eating the meat of monsters, implanting parts of cyborgs and robots defeated in battles.

The setting of Final Fantasy Legend III combines fabulous fantasy elements with science fiction, in the center of the plot is a team of three characters who travel in a large airship from the future to the past in order to prevent a global catastrophe leading to the destruction of the entire world. In the course of the development of the narrative, they are joined by some other heroes, imbued with the threat hanging over the world and agreed to provide all possible help. The game was translated into English by Ted Woolsey, and this localization was his first collaboration with Square.
‹
›
Home
View web version