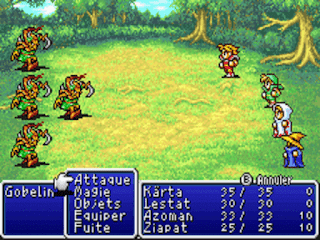 Genre: Compilation, Role-Playing (RPG)
Perspective: Top-down
Art: Anime / manga
Pacing: Turn-based
Setting: Fantasy
Published by: Nintendo of America Inc.
Developed by: Square Enix Co.
Released: 2004
Platform: Game Boy Advance (GBA)
Recommended for everyone who wants to revive the very first parts of the Final Fantasy RPG series (or wants to familiarize themselves with them). Of course, on GBA the 1st and 2nd parts look better than in the original, but in general the games are the same. In addition, a so-called "bestiary" has been added for each of the games - this is a kind of encyclopedia of monsters encountered on a long combat path, with their full statistics and a description of their weaknesses / advantages. Well, knowing the monsters is a great power, especially in Final Fantasy.
‹
›
Home
View web version