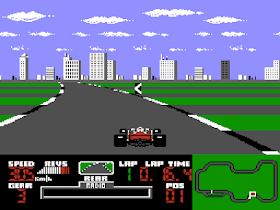 Genre: Racing / driving
Perspective: Behind view
Gameplay: Arcade
Vehicular: Automobile, Track racing, Vehicle simulator
Published by: Acclaim Entertainment
Developed by: System 3 Software Ltd.
Released: 1992
Platform: Nintendo (NES)
In the "Ferrari Grand Prix Challenge" we play the role of the pilot of the "Ferrari" team, and we have to go through a whole season, that is, 16 tracks located in different parts of the world. For the final victory, you need to score the largest number of points in the overall standings. Before each race, you must drive a qualifying circle, according to the results of which our location at the start of the main heat is determined. There are 26 riders participating in the race, and one of them, A. Sessions, is our team mate, with whom we will need to earn points in the constructors' cup.
From the settings of the machine, only the choice of the type of transmission can be distinguished: automatic transmission or manual (3 Speed). A manual gearbox gives more speed and acceleration than an automatic one. however, when passing qualification, the speed of the car for any type of transmission does not exceed 325 km / h (although when passing qualification on a manual gearbox, the speedometer shows a speed of 335 km / h at maximum acceleration).

When participating in the Grand Prix, we are given 5 laps to complete the track. After the end of the race, the six first arriving participants are added a certain number of points to the overall standings: the first arriving receives 10 points, the second - 6 points, and so on in descending order of places: 4, 3, 2 and 1 point, respectively.
The game has 2 modes: Qualify and Practice. Qualify mode is the main mode, that is, passing the championship, gaining points in the overall standings, etc. In Practice mode, you can test your driving skills or just study the tracks.
The Ferrari Grand Prix Challenge uses special codes to save game progress. At the same time, information is saved about the trails passed, the names of the first 6 drivers in the overall standings and the number of their points, as well as information about the type of car transmission we have chosen.

Known bugs in the game

All of these shortcomings prevent the game from gaining a lot of rating points, since its graphic design is also not up to par - in 1992 I would like to see something more. Of the undoubted advantages of the game, one can single out its full compliance with the rules of real Formula 1 races, as well as the fact that the game features 16 real championship tracks. It is also worth noting that the music for the game was written by the famous Neil Baldwin, who is also involved in such projects on the NES as: "James Bond Jr.", "Jungle Book", "Magician", "Dropzone" and many, many others ... The game is recommended for passing only for big fans of royal races.
‹
›
Home
View web version