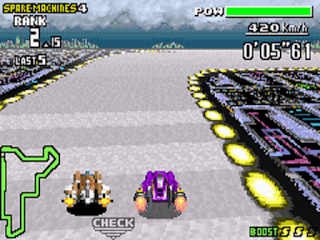 Genre: Racing / driving
Perspective: Behind view
Vehicular: Hovercraft, Track racing
Setting: Sci-fi / futuristic
Published by: Nintendo of America Inc.
Developed by: NDCube Co., Nintendo R&D1
Released: 2001
Platform: Game Boy Advance (GBA)
Captain Falcon, Dr. Stewart ... It has been a quarter of a century since they rose to fame as F-Zero racing drivers, and with the passage of time their glory days have faded and only something resembling a legend. The great danger of F-Zero racing caused some to call for an end to them, but now a new generation of drivers has emerged who is willing to continue to write pages in the history of the sport. It is the eternal search for victory, fame and fortune.
Humanity had plunged into a period of relative calm after its great leap into space. Among those recovering from the initial frenzy of space races were the powerful merchants of the time. With experience they found that while great space journeys offered incredible commercial opportunities, with these great distances they also suffered the ravages of piracy. They concluded that they could not bear the cost of being constantly robbed, so they ended up limiting themselves to regulating and defending their territories. His conservative business practices put large numbers of high-level space pilots out of work, resulting in a bold group of men and women who wanted to get rich in the only way possible: as F-Zero pilots.

The Grand Prix mode is the main section of the game where you can compete in the different cups and at different levels of difficulty. Each glass is made up of five different circuits, showing a certain gradual complexity as it progresses.

In Training mode, the player can race in the different circuits traveled in the Grand Prix mode, being able to train in a specific circuit without having to run in the rest of the circuits.

The Multipak Link mode is a multiplayer mode where up to a maximum of four players can compete with each other on the various circuits of the game, making use of as many game cartridges as there are players.

Singlepak Link mode is a multiplayer mode where, as in Multipak Link mode, up to a maximum of four players can compete with each other, but with the difference that this mode is more limited when using a single game cartridge .

Once you have chosen a machine to compete with and selected a cup to start racing, there are 3 levels of difficulty: BEGINNER, STANDARD and EXPERT. Once a cup is beaten in EXPERT mode, a new difficulty level appears in that same cup, MASTER.
‹
›
Home
View web version