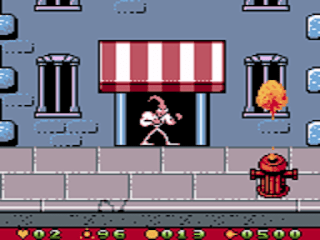 Genre: Action
Perspective: Side view
Visual: 2D scrolling
Gameplay: Platform
Narrative: Comedy
Published by: Crave Entertainment
Developed by: David A. Palmer Productions
Released: 1999
Platform: Game Boy Color (GBC)
In the story, Evil Jim, in order to capture the galaxy, stole an interdimensional teleport, which was created by Professor Monkey-For-A-Head. The main character of the game, Earthworm Jim, is going to prevent the insidious plans of his evil twin and save the galaxy.
The gameplay resembles the previous parts of the series, but here the emphasis is on finding objects and exploring levels. The player controls Jim the worm, armed with one of four weapons, with which you can destroy enemies. The stock of weapons is limited, but you can replenish it by collecting on the levels. If Jim touches an enemy or a dangerous object, he will lose health points. If they are completely depleted, then the player loses life and starts the level again. Initially, the player is given two lives, and if they are lost, the game ends. At the levels, you can pick up additional lives in the form of Jim's head, and you can replenish health points by collecting molecules. On the levels, you can interact with other objects (trash cans, toilets, and so on), allowing you to go through various areas. In addition, you can find Jim's friend, Snot, who allows the worm to jump higher and ride him. You can find a rocket on which you can fly for a while, as well as shoot from it.
To complete each level, except for battles with bosses, you need to collect a certain amount of coins, which can both be found in hard-to-reach places and obtained as a result of destroying enemies. There are 12 main levels in the game, to access which you need to pass the introductory level "City" at the beginning of the game. Every third main level is a boss battle, which uses villains from previous games and the animated series about Earthworm Jim, such as the Bob the Killer Goldfish, Evil the Cat, Queen Slug-for-a-Butt and Evil Jim. After passing each level, the player is shown a password that can be used in a new game to skip the levels already passed.
‹
›
Home
View web version