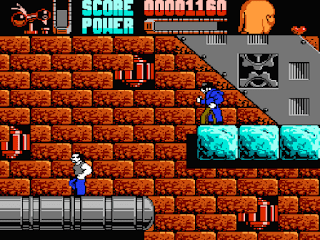 Genre: Action
Perspective: 1st-person, Side view
Visual: 2D scrolling
Gameplay: Platform, Shooter
Setting: Sci-fi / futuristic
Published by: Ocean Software Ltd.
Developed by: Painting by Numbers
Released: 1991
Platform: Nintendo (NES)
"Darkman" is a platformer based on the 1990 movie of the same name with the participation of the protagonist taking revenge on a group of bandits who beat him so badly that now he has to hide his face from everyone. The film was not particularly outstanding, but, in general, the public liked it. Dr. Peyton Westlake is on the cusp of a grand discovery: he is finishing experiments to create artificial human skin. But a gang of criminals led by a perverse sadist Robert G. Durant invades Peyton's laboratory and blows it up along with the unfortunate doctor. Miraculously survived and disfigured beyond recognition, Peyton decides to take revenge on the scum. But now he will appear before them not as Dr. Westlake, but as a formidable Darkman, who does not have a face of his own, but is capable of reincarnating as a desperate avenger.
Locations in the game are so varied that sometimes it seems as if "Darkman" was clearly underestimated at the time. Repeatedly I caught myself thinking that I get quite real pleasure, making my way through the world of this game. Fortunately, audio and video did not seem annoying to me for a minute. Each level has different ringtones in the background. The game has very good graphics and playability, but the main thing is that you enjoy the gameplay. I advise you to take a closer look at her!
‹
›
Home
View web version