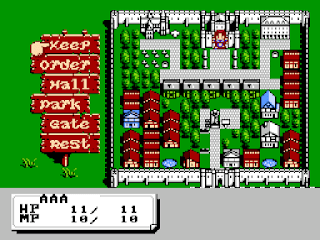 Genre: Role-Playing (RPG)
Perspective: Top-down
Published by: Data East
Developed by: Data East
Released: 1991
Platform: Nintendo (NES)
Before starting the gameplay, we need to create a party of three adventurers who, throughout the game, will try to save the world from the evil god Ragmeila and his demihuman creations. You can only choose between two classes for each character - fighter or master. But, believe me, the heroes of different are very different! Each of them reacts to damage in its own way, each of them has a different speed of movement and its own unique abilities. There are also attributes that govern skills. For example, avoid and disarm traps; they determine luck, trading skills, and so on. Each class has a unique, non-random base set of attributes. In the course of the game, we will have to receive bonus points in order to increase all the indicators to our liking. In general, there will be something to think about.
After the characters gather at our call, they find themselves in one of the cities of the Dark Lord called Ishtar, which is the headquarters of the heroes. Here we will have to buy and sell uniforms and items, visit the sovereign to increase our level, and there is also an opportunity to save. In the city of Ishtar, the heroes feel, so to speak, at peace and are completely safe here. And they even go about their daily peaceful work, master professions - and this greatly affects the gameplay.
There are quests outside the city. The game is divided into several chapters, and in each you have to complete certain tasks. Of course, the heroes gain experience points to a greater extent precisely from completing quests than from killing various kinds of monsters. Very clever puzzles await us, sometimes requiring active brain work. This affects the game world in the most positive way.
The battles are excellent. When the heroes start fighting monsters, the game switches to a mode in which each character can move individually. They can approach monsters or use magic to strike them at a distance. After the battle, you can loot corpses to replenish your capital or find various things and items. Due to the lack of any significant reward after battles, it is possible to avoid battles when necessary. This is a very significant plus, since occasional battles are sometimes just infuriating! You can see enemies out of combat, which makes it easier to pass this toy, and brings a large share of the pleasure of a well-thought out work.
The storyline in "Dark Lord" is good enough, the game has two endings. But, I will not describe them - go through everything yourself from beginning to end and get real pleasure.
"Dark Lord" for NES has very good graphics: the sprites are large, the landscapes are varied, many people in the city get their little portraits that are shown when we talk to them. "Dark Lord" is definitely worth your precious time. The worst thing I can say about the game is that it is too short - you can finish with it in about eight hours (of course, with luck and great erudition in solving various kinds of riddles)! Criticism in relation to this game is generally inappropriate.
‹
›
Home
View web version