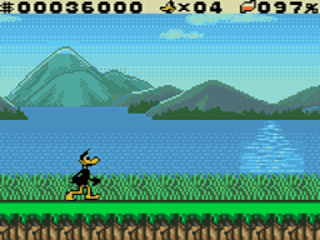 Genre: Action
Perspective: Side view
Visual: 2D scrolling
Gameplay: Platform, Puzzle elements
Published by: Sun Corporation
Developed by: Santa Claus
Released: 1999
Platform: Game Boy Color (GBC)
In this game, Duffy Duck searches for the treasure that Bugs Bunny told him about, and the Looney Tunes characters try to stop him. The game has 9 levels. The difference from such games is that the drake has a hunger scale. He needs to be constantly satisfied by collecting food as the game progresses.
‹
›
Home
View web version