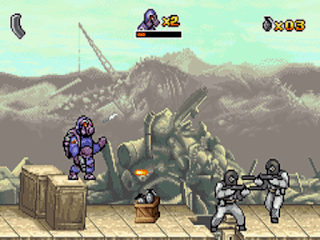 Genre: Action
Perspective: Side view
Visual: 2D scrolling
Gameplay: Platform, Shooter
Published by: Light & Shadow Production
Developed by: Light & Shadow Production
Released: 2004
Platforms: Game Boy Advance (GBA), PlayStation (PSX, PS1)
The third part of a cool action game. Despite the fact that the graphics and gameplay have practically not changed, nevertheless, the authors of the game managed to "maintain the brand", that is, it is interesting to play from the very first seconds. Any relaxation in the fight against terrorists (albeit virtual ones) is unacceptable, which means that you will again have to shoot, run, and jump a lot. Insidious militants, snipers and other bandits will strive with all their might to kill your valiant special forces, but you can rightfully show them shish and shoot everyone. In general, play without much thought./div>
‹
›
Home
View web version