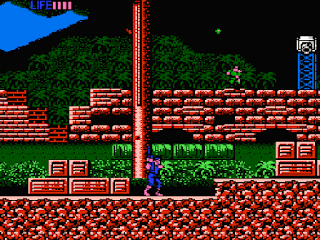 Genre: Action
Perspective: Side view
Visual: 2D scrolling
Gameplay: Shooter
Published by: Kyugo Trading Co.
Developed by: Sanritsu Denki Co.
Released: 1990
Platform: Nintendo (NES)
We play as Eric, a special forces soldier who is thrown to carry out military missions in the forests of Vietnam, on the streets of Prague, on a drug plant in Colombia, in the desert of Afghanistan and even in Vladivostok. Our main task is to pass all the listed enemy points and eventually destroy the enemy Shuttle. "Crossfire" is in many ways reminiscent of "Black Ops" - against the backdrop of the current Cold War, we are told about a secret mission of one man in enemy territory. Eric is shown to be a very fearless warrior, capable of killing enemies with his bare hands and having the courage to face tanks and even helicopter gunships. The inspiration of the developers apparently came from watching the second and third parts of the movie "Rambo".
As soon as you start playing "Crossfire", you immediately see that the most important component for every game nowadays, the graphics, is all right. All front and back backgrounds are depicted in great detail and clearly. It is even more amazing how the console without brakes renders scenes with an abundance of a large number of enemies and different actions - shooting from the distant side, soldiers running at us, cars and tanks standing in the background, planes descending from the air. And all this happens at the same time!
Initially, the game seems to be a clone of the more famous "Contra", but upon closer inspection, it turns out that "CrossFire" is more serious and complex, and it also reflects quite real events. The game is quite difficult and will be more difficult to complete than "Contra". There are only five types of weapons in the game, and they are not very common here, so we hardly have to think about what to shoot from - exactly the weapon that you find will be good. The controls in the game are not very convenient, the main character seems to be a little slowed down, he clearly lacks responsiveness and speed. And one more drawback - the game is quite short and can be played in one breath in a couple of hours, and the replay factor can be defined as average.
‹
›
Home
View web version