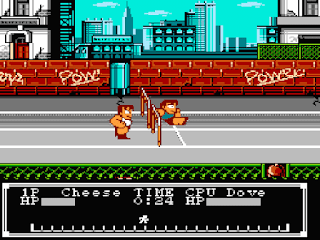 Genre: Action, Sports
Perspective: Side view
Art: Anime / manga
Gameplay: Arcade, Beat 'em up / brawler, Fighting, Tricks / stunts
Published by: American Technos Inc.
Developed by: Technos Japan Corp.
Released: 1992
Platform: Nintendo (NES)
The game has a choice of four different commands for the player and five for the computer. Each team, in turn, consists of five players, each with their own strengths and weaknesses. Therefore, for a specific game, you can always recruit a suitable lineup. Before each event, the player has the opportunity to go shopping at the mall and buy bonuses for their characters (bonuses are paid using the medals you earn). Therefore, it is very important that the upgrade of players is done in moderation, and only for those who will be performing in the next competition. Then you are assured of victory.
There are two types of competitions in the game: individual (hammer throw and jumping up) and those where you have to compete with an opponent (400 meters hurdles, swimming, wrestling). In individual events, each team performs in turn, and the rating is determined by the highest score of an individual player. Competitions with an opponent take place as part of a knockout tournament, in which one player opposes another in several forms. Whoever successfully defeats their opponents will be eligible to compete against a Thornley team member for first place.
The game can be played by up to four players. Since no more than two teams can play at the same time, the third and fourth players simply alternate the available two joysticks with the first and second players. Thus, it does not require 4 joysticks to support four players like other games in the "Kunio-kun" series.
‹
›
Home
View web version