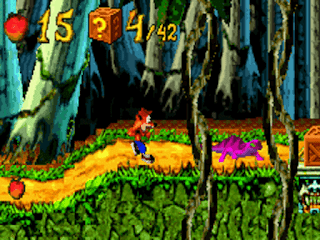 Genre: Action
Perspective: Side view
Gameplay: Platform, Shooter
Setting: Fantasy
Published by: Universal Interactive Inc.
Developed by: Vicarious Visions
Released: 2002
Platform: Game Boy Advance (GBA)
Crash Bandicoot: The Huge Adventure is a platformer game in which the player controls Crash Bandicoot, whose goal is to collect 20 crystals and once again destroy the insidious plans of Dr. Neo Cortex. The game is split into four large parts, each with five different levels and one boss. Initially, only one part is open, but after defeating the boss, the next one opens, etc. The main goal at each level is to find a crystal, which is necessary for the further progress of the game, and it, in turn, can be called completed only after all are found. 20 crystals.
In addition to crystals, you can find gems or multi-colored gems. The former can be obtained if all the boxes are broken at the level, while the latter are hidden in hidden levels. There are also relics, the method of obtaining them is similar to that in Crash Bandicoot 3: Warped.
And if you still collect all the stones and relics, then an alternative ending will be shown. In it: When Crash defeats Cortex, Cortex begins to scold his assistants. Suddenly, his beam breaks down and unites all the villains. And Cortex turns into a monster! After that, you need to go through the final level - to escape from this monster and get an additional stone. And then, as in the usual ending. In the finale, the villains find themselves in the cramped wreckage of Cortex Station.

The main plot of the game is centered on another atrocity of Dr. Neo Cortex, whose goal this time is to shrink planet Earth using a giant weapon called the Planetary Minimizer. The protagonist of the story, named Crash Bandicoot, must collect all the crystals in order to wrap up the effect of the weapon and return the original size of his home planet, as well as defeat Dr. Cortex and his minions.
‹
›
Home
View web version