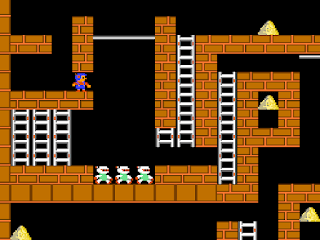 Genre: Action, Puzzle
Perspective: Side view
Visual: 2D scrolling
Gameplay: Arcade, Platform
Interface: Direct control
Published by: Hudson Soft Company
Developed by: Broderbund Software
Released: 1985
Platform: Nintendo (NES)
In the game we control a little man who must collect all the gold scattered across the level and avoid meeting robots (in the sequels robots are replaced by "mad monks". The entire level is fully visible on the screen and consists of brick platforms, ladders, as well as stretched ropes, along which you can move, holding on to them with your hands. The character of the game cannot kill robots, but he can create pits in front of them in the brick floor - and the robot caught in the pit lingers there for a while. The hero can fall from any height without crashing, but he cannot jump. After all the boxes with gold are collected, a ladder (or several) appears, along which you need to get to the top of the screen - this will lead us to the next level.
There are 75 levels in the original "Lode Runner". Each new level requires a more complex strategy as to in which order to bypass the level and where to dig holes in order to collect all the boxes of gold and not fall into the hands of the enemy. The strategy can also include ways to create one large pit from many ordinary pits dug one after another. As you move on to higher levels, the game becomes more "puzzling" than a reaction speed game, although both remain important.
Many versions of the game (including the original version) have a built-in level editor for creating custom maps.
The port for the NES console called "Championship Lode Runner" has 50 levels, each of which spans several screens in a horizontal direction. Like many early NES games, it has no end, and after completing level 50, the first begins again. The graphics are generally more detailed than the original. The game has a level editor that allows you to create levels yourself, however, they are limited to only one screen. The opponents in the game are robots that look like Bomberman. This is not a coincidence: according to the plot of the game "Bomberman" in its final cutscene, it is shown that he turns from a robot into a Gold Digger, leaving the connection between the two games to our little thought.
Estimates for the individual components of the game: gameplay - 9, controls - 9, graphics - 8, music - 7, the level of difficulty is outrageous (especially for the last stages), the replay value is high. The total score is 8 out of 10 possible.
‹
›
Home
View web version