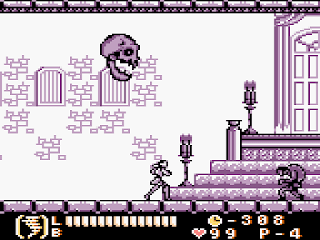 Genre: Action
Perspective: Side view
Visual: 2D scrolling
Art: Anime / manga
Gameplay: Platform
Setting: Fantasy
Narrative: Horror
Published by: Konami of America
Developed by: Konami Computer Entertainment Nagoya Co.
Released: 1998
Platform: Game Boy
The third game in the Castlevania series on GameBoy. Here we run a Belmont woman named Sonia. The brave warrior, against the wishes of her lover, the half-vampire Alucard, went to the vampire castle to fight Count Dracula. Here we do not use special weapons, as in other platform parts of the series, but the magic that we get after defeating bosses. And special weapons - an ax, a watch, a knife, holy water and a cross - we just need to find and collect in order to get the best ending in the game. The game is in many ways inferior to the best representatives of the series. The heroine herself is slow, and the enemies, on the contrary, are fast and annoying, moreover, they are reborn anew at the slightest shift of the screen. But in addition to other games in the series, this one is worth checking out. The events of the game take place before the third part on the NES, but the story about Sonia is not considered canon in the series.
‹
›
Home
View web version