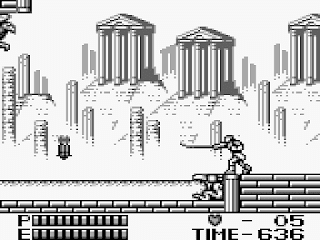 Genre: Action
Perspective: Side view
Visual: 2D scrolling
Gameplay: Platform
Setting: Fantasy
Narrative: Horror
Published by: Konami
Developed by: Konami Co.
Released: 1991
Platform: Game Boy
The game takes place 15 years after Castlevania: The Adventure, when Dracula returns and kidnaps Soleil, the son of Christopher Belmont, on his day of majority and turns him into a demon. With the mystical powers of Soleil, Dracula regains his human form and his castle, forcing Christopher to confront him again to save his son and Transylvania.

Unlike the previous game for the Game Boy, auxiliary weapons are available in the game in the form of holy water and axes (or a cross in the Japanese version). There are four starting levels, each of which takes place in a separate castle with a unique theme such as air, plant, earth, and crystal, which can be completed in any order, similar to Mega Man. There are also very large rooms with traps on the levels. The game also uses a password system.
‹
›
Home
View web version