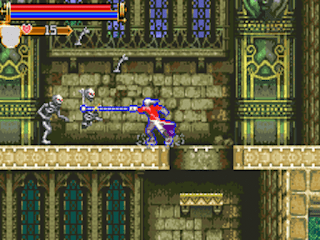 Genre: Action
Perspective: Side view
Visual: 2D scrolling
Gameplay: Arcade, Metroidvania, Platform
Setting: Europe, Fantasy
Narrative: Horror
Published by: Konami of America
Developed by: Konami Computer Entertainment Tokyo
Released: 2002
Platform: Game Boy Advance (GBA)
The second Castlevania on the GBA and the first portable creation from the creators of the famous Symphony of the Night. In general, the game resembles a "pocket" version of "Symphony of the Night": the same bright (sometimes even too much) picture, the same intricate castle, the same spectacular main character. Although here we are already playing for Juste Belmont. According to the plot of the game, the hero will have to face the ominous Remains of Dracula, help out his beloved and save his best friend from the curse of the vile vampire. There are even more rooms in the castle than in "Symphony of the Night". To find out all the secrets, you will have to smash your head (and not miss the dialogues, which are abundant here).
‹
›
Home
View web version