Castlevania: Circle of the Moon (GBA) 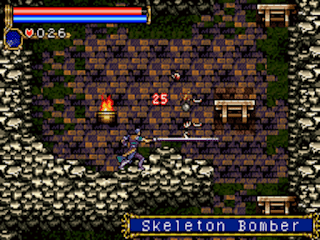 Genre: Action
Perspective: Side view
Visual: 2D scrolling
Gameplay: Metroidvania, Platform, RPG elements
Setting: Europe, Fantasy
Narrative: Horror
Published by: Konami of America
Developed by: Konami Computer Entertainment Kobe
Released: 2001
Platform: Game Boy Advance (GBA)
The first Castlevania on the GBA sends us to a gloomy Austrian castle, overrun with monsters and traps. We play as a young vampire hunter (armed with a whip) Nathan Graves, who must single-handedly save the teacher from being sacrificed and prevent the threat of Dracula. The developers were clearly inspired by the notorious "Symphony of the Night", while adding a lot of new to the concept of the masterpiece from PSX. You can fight enemies using the system of magic cards. There are twenty cards in total, 10 are dedicated to the gods and 10 to the spirits of the elements. By combining them in pairs (1 god card + 1 spirit card), we provide the character with new capabilities. The difficulty in the game is higher than in other castles of this type. Circle of the Moon is not like other Metroidvania, which to a certain extent makes it interesting and attractive.
‹
›
Home
View web version