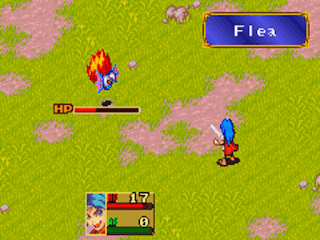 Genre: Role-Playing (RPG)
Perspective: Top-down
Art: Anime / manga
Pacing: Turn-based
Gameplay: Japanese-style RPG (JRPG)
Setting: Fantasy
Published by: Capcom Entertainment
Developed by: Capcom Co.
Released: 2001
Platforms: Game Boy Advance (GBA), Super Nintendo (SNES)
Breath of Fire takes place in the years that follow a great civil war between two clans of dragons: Light and Dark. The Light Dragons are nearly extinct, reduced to hiding places in small villages. The protagonist is Ryu, a young Light Dragon who awakens one night and finds his city on fire after an attack by the Dark Dragons. After kidnapping his sister in the said attack, he sets out to save her. During his journey, he begins a search for seven magical keys, before the Dark Dragons can use them to awaken a goddess of destruction.

Breath of Fire consists of four basic gameplay modes: a world map, city and dungeon maps, a battle screen, and a menu screen. The world map is a scaled-down and simplified version of the game's fictional world, which the player uses to navigate between various locations. Most of the game's battles are fought on the field maps or the world map. Most characters have a specific field action outside of battle, and in some moments such action will be necessary for the continuation. For example, the group cannot go through forests until Bo leads the team.
The color palette of maps changes according to the time of day. When the group finds itself on the world map, the sun rises and sets every minute of real time. In certain situations, the player needs to wait the night before entering a certain city.

The Dark Dragons continue to hunt down their enemies, the Light Dragons, and have forced them into isolation. The game's protagonist, Ryu, lives in peace in a village formed by survivors of the Light Dragon clan. Ryu has been an orphan since childhood and was raised by his sister Sara, a priestess with great magical powers. One night, he dreams of a dragon that warns him of impending danger; he awakens and finds the village in flames. Sara uses her magic to drive the Dark Dragons away from Ryu, but is captured.
Dark Dragon Emperor Zog announces that it is the Dark Dragons' right to rule the world. Zog intends to free the goddess Tyr with the use of six magic keys, and Ryu sets out on a search for the keys before Zog finds them.

Breath of Fire features eight playable characters, including Ryu, a member of the Light Dragon family who had his sister kidnapped by the Dark Dragons; Nina, princess of Winlan, who joins Ryu after he saves her father's life; Bo, a werewolf hunter who has a common enemy with Ryu; Karn, a thief who can open any lock and disable any trap; Gobi, a Manillo thrown out of his clan for being too greedy even for his race; Ox, a blacksmith who is forced to work on a secret weapon; Bleu, an immortal mage with a snake body; and Mogu, a mole-like creature who was trapped in his own nightmare after a spell.
Each of them has scores to settle with the Drak Dragons and Zog. Other antagonists include Zog's lieutenant Jade, who defeats Ryu's sister in the opening game. Jade's lackeys are Cort, a mad scientist; Cerl, a mage who hates humans because of the way she was treated; Mote, a sorcerer who can terrorize people in their dreams; and Goda, an armored goliath.
‹
›
Home
View web version