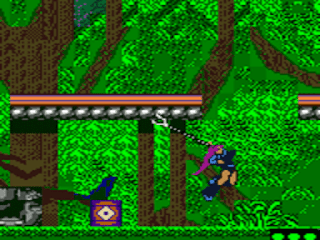 Genre: Action
Perspective: Side view
Visual: 2D scrolling
Gameplay: Arcade, Platform
Setting: Sci-fi / futuristic
Published by: Nintendo of America Inc.
Developed by: Nintendo Software Technology Corporation
Released: 2000
Platform: Game Boy Color (GBC)
Although it borrows some elements from its predecessors, Elite Forces is different from the rest of the Bionic Commando series; Among the changes are a different plot, new movements for the main characters - no female name and male commandos - and the ability to use a sniper rifle in some segments of the game.

The peaceful land of Karinia is being terrorized by an evil man named Arturus. He is the leader of an army misnamed Los Ávaros. As the elite forces combat the Avars, they receive a fragmented communication from Commander Super Joe, who had infiltrated his territory. Joe's message revealed that Arturus was planning to launch Project Albatros. After that, communication with Joe had been lost. The Bionic Corps contacted elite forces to help stop the Avars, prevent Karinia's downfall, and rescue Super Joe.
‹
›
Home
View web version