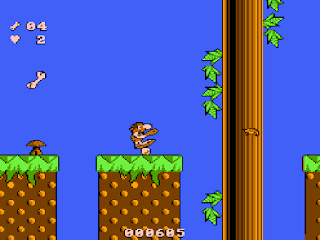 Genre: Action
Perspective: Side view
Gameplay: Arcade, Platform
Published by: Camerica Limited Inc.
Developed by: Optimus Software Ltd
Released: 1992
Platform: Nintendo (NES)
"Big Nose Freaks Out" is a direct sequel to the first part titled "Big Nose the Caveman". This is a pretty cute and addicting game about a prehistoric man riding the first "prototype" of a modern skateboard.
The background of the game is as follows: the main character was stolen from a prehistoric bank of monetary units - bones! Yes, none other than the Dinosaur himself. We must teach the impudent a lesson!
Armed with his prehistoric club, the caveman rolls around the level (there are 5 levels in the game in total), and destroys a variety of prehistoric animals, be it a giant bee or a carnivorous plant.
In general, the game turned out to be very good: beautiful cartoon graphics, good animation and cool music. As for the gameplay, it can be described in two words - unusual and addictive.
‹
›
Home
View web version