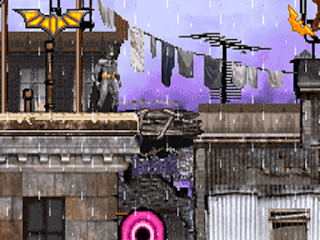 Genre: Action
Perspective: Side view
Visual: 2D scrolling
Gameplay: Arcade, Beat 'em up, Platform
Published by: Electronic Arts
Developed by: Vicarious Visions
Released: 2005
Platform: Game Boy Advance (GBA)
Based on Hollywood movie. It tells the story of how Bruce Wayne became Batman, and therefore at certain points in the game you control Bruce without any Batman "stuffing". But, of course, the main game action takes place under the sign of the Bat. The game is an action movie of a fairly high level, with good graphics and sound. As a collecting part, the collection of golden bats, which are hidden in the levels, is presented. Batman's combat skills in hand-to-hand combat are quite extensive (this is common knowledge), and there is also some inventory (harpoon, gas grenades, etc.). The game is good, it is recommended to everyone.
‹
›
Home
View web version