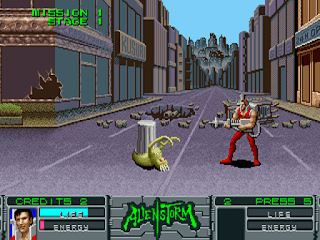 Genre: Action
Perspective: 1st-person, Side view
Visual: 2D scrolling
Gameplay: Arcade, Beat 'em up / brawler, Shooter
Setting: Sci-fi / futuristic
Published by: SEGA Enterprises Ltd.
Developed by: Team Shinobi
Released: 1990
Platforms: Arcade Machine, SEGA Genesis / Mega Drive
The game offers to play 3 characters: a robot, a man strangely resembling Elvis and finally a woman. They are respectively armed with an electric whip for the robot, a lightning rifle for the man and a flamethrower for the woman.
The game has 8 levels in which the player must face a multitude of aliens, from the smallest to the largest, the last level taking place inside a biomechanical alien ship. The life gauge of the characters is large but that of the energy is very short (the characters do not have unlimited ammunition).
‹
›
Home
View web version