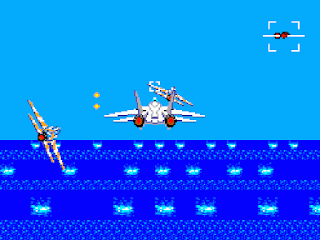 Genre: Action
Perspective: Behind view
Gameplay: Arcade, Shooter
Vehicular: Flight / aviation
Published by: SEGA of America
Developed by: SEGA Enterprises Ltd.
Released: 1988
Platform: SEGA Master System
You control a fighter jet, cutting through the air spaces of the sky. The arsenal contains rockets and a machine gun. The main character's task is to destroy all enemies. This is not so easy to do as it seems at first glance. The difficulty of the game is very high, which is why you will have to start the game from the beginning more than once. Dynamic events and a lot of enemy fighters will not let you rest for a second. The control of the plane is pleasant, which makes it easy to get away from missiles flying at you. The musical accompaniment fits well into the atmosphere of the game, but, unfortunately, does not spoil the variety. The game stages, although they differ from each other, still look very sparse in terms of graphics.
‹
›
Home
View web version