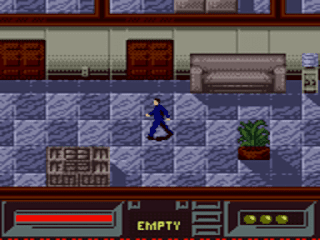 Genre: Action
Perspective: Bird's-eye view
Visual: 2D scrolling
Gameplay: Shooter, Stealth
Interface: Direct control
Narrative: Spy / espionage
Published by: Electronic Arts
Developed by: 2n Productions
Released: 2001
Platforms: Game Boy Color (GBC), PlayStation (PSX, PS1), Nintendo 64 (N64)
Not a bad tactical action game based on the James Bond movie - The World is Not Enough. You control agent 007, at first he is not armed with anything, but this is only at the beginning, during the passage of missions he will probably find some kind of gun or pistol. The graphics in the game are not bad, but the music is tiresome, in any case the game is excellent.
‹
›
Home
View web version