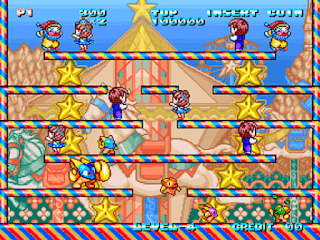 Genre: Action
Gameplay: Platform
Setting: Fantasy
Published by: SNK Corporation
Developed by: FACE
Released: 2001
Platform: Neo-Geo
The main character is a star, which controls several other smaller creatures of its own kind. The essence of the game is that a funny star jumps on platforms in order to destroy enemies. The player can only try to dodge opponents and strive to score as many points as possible. The protagonist uses his companions as a weapon of struggle. He can also receive various special abilities during the game (super speed, strong blow, etc.). Several worlds are offered to your attention. Each is distinguished by its original enemies. At the end of each of the worlds, the player will have to face serious bosses who are rapidly trying to destroy you. Throughout the game, you will be accompanied by a pleasant palette of colors of the game. Nice sprites delight the gaze of the player. In addition, the atmosphere of the game is filled with colorful special effects and hilarious soundtracks.
‹
›
Home
View web version