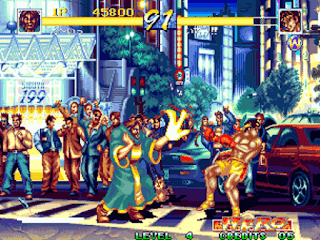 Genre: Action
Perspective: Side view
Visual: 2D scrolling
Gameplay: Fighting
Published by: SNK Corporation
Developed by: ADK Corporation, SNK Corporation
Released: 1995
Platform: Neo-Geo
This project is the conclusion of the entire World Heroes series. Therefore, the developers paid special attention to it, and as it turns out not in vain. They made the Perfect postscript with the intent to create a better project. This game contains all the best of the previous parts. The developers considered it necessary to create a more serious atmosphere here. In confirmation of this, the initial splash screen of the game, which received a lot of attention. Among the fighters, you can choose any of the sixteen that were encountered in the previous parts of World Heroes. Each character is made with high quality and taste. In addition to the usual techniques, the fighter is able to perform special hero attacks that inflict severe harm on the opponent. A variety of arenas are full of their beauty and make the gamer look away. This game is undoubtedly the best project in the World Heroes series and is able to attract the attention of fans of fighting games.
‹
›
Home
View web version