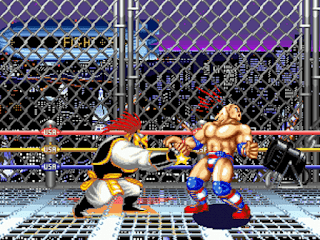 Genre: Action
Perspective: Side view
Visual: 2D scrolling
Gameplay: Fighting
Interface: Direct control
Published by: SNK Corporation of America
Developed by: Alpha Denshi Kogyo Co.
Released: 1992
Platforms: Neo-Geo, SEGA Genesis / Mega Drive
Fighters from different countries gather from all over the world and fight for the rank of the best. Eight charismatic characters are brought to your attention. Each differs in its own set of techniques. All fighters defend the honor of their country. If you look closely, you can find among the fighters similar to such famous people as Hulk Hogan and Bruce Lee. They are similar in appearance in the manner of fighting. Before the battle, you will be offered a choice of stage type (normal or death match), i.e. fighting in simple or dynamic arenas. The second type differs in that the environment of the stage can be used as a method of fighting the enemy, but at the same time you can get damaged. One such arena is the ring, surrounded by electricity ropes.
‹
›
Home
View web version