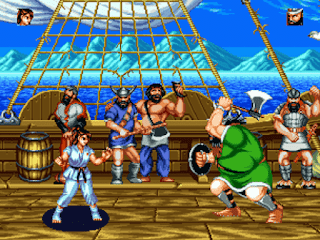 Genre: Action
Perspective: Side view
Visual: 2D scrolling
Art: Anime / manga
Gameplay: Fighting
Published by: ADK Corporation
Developed by: ADK Corporation
Released: 1993
Platform: Neo-Geo
Sequel to the first part of World Heroes (set 1). There are no longer eight fighters, as it was before, but fourteen. Each is equipped with its own teaser. The game modes remained the same (normal and death match). The entry into the game has become more spectacular. The characters have become better traced. The sprites of the second part of the game are made more beautifully. The stages are more dynamic. Among other things, the developers diluted the atmosphere of the game with subtle humor, which is strictly selected. A better balance can be found in the SNES version.
‹
›
Home
View web version