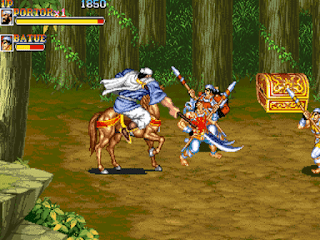 Genre: Action
Perspective: Side view
Visual: 2D scrolling
Gameplay: Beat 'em up
Setting: China (Ancient / Imperial), Historical events
Narrative: War
Published by: Capcom U.S.A.
Developed by: Capcom Co.
Released: 1992
Platform: Arcade Machine
This game continues the story of the first part (Dynasty Wars), only the battle now takes place mainly on the ground. All those who, playing the first project, dreamed of getting off to fight the enemies, now have this opportunity and can rejoice. In the graphics, the game has significantly added, the locations are made picturesquely and varied. You have to play as one of 5 characters in the service of the emperor, and each has its own unique techniques, so it will be interesting to play for everyone. Two characters are armed with melee weapons, one with a bow, and two fight with their bare hands. The combat process diversifies the plot and funny mini-games.
‹
›
Home
View web version