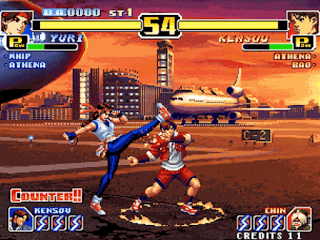 Genre: Action
Perspective: Side view
Visual: 2D scrolling
Art: Anime / manga
Gameplay: Fighting
Published by: SNK of America
Developed by: SNK of America
Released: 1999
Platforms: Neo-Geo, PlayStation (PSX, PS1)
Now the tournament of fights takes place in 1999. The developers took this part of The King of Fighters series more seriously. But it is also not without its drawbacks. Unfortunately, the number of fighters has decreased markedly. Now there are thirty of them. But it is clear that a lot of attention was paid to each character. Their movements have become more dynamic and beautiful. In addition to the usual techniques, a fighter can perform joint attacks with his allies. The hand of specialists is also visible when working with graphics. The game picture has become more detailed.
‹
›
Home
View web version