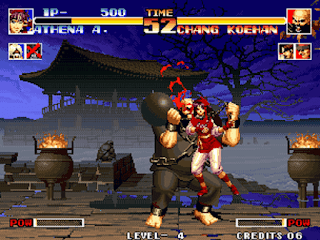 Genre: Action
Perspective: Side view
Visual: 2D scrolling
Art: Anime / manga
Gameplay: Fighting
Published by: SNK of America
Developed by: SNK Corporation
Released: 1994
Platform: Neo-Geo
This 1994 fighting game is the beginning of the entire The King of Fighters series. From the name it is clear that the best fighters from all over the world meet and fight for the title of the best. Each person is personally sent a letter with an invitation to the competition. A distinctive feature of this fighting game is that teams of certain countries, of which there are as many as eight, are fighting here. Three people stand for each. During the fight, if one is defeated, the next member of the team immediately appears. The game's graphics don't look up to the mark, but what else can you expect from a 1994 fighting game. Despite this, she is not deprived of her portion of vivid special effects. The complexity of the game is great, and you will have to spend a lot of effort to complete it.
‹
›
Home
View web version