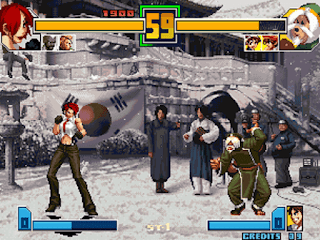 Genre: Action
Perspective: Side view
Visual: 2D scrolling
Gameplay: Arcade, Fighting
Narrative: Martial arts
Published by: Eolith Co.
Developed by: BrezzaSoft, Eolith Co.
Released: 2002
Platform: Neo-Geo
This fighting game focuses on the number of characters. Now there are as many as forty of them. All the disadvantages of the previous parts have been eliminated. In general, this game can be called worthy of the fighting genre. A decent level of detail, good controls, lack of overstated complexity, beautiful animation of fighters - all this can attract even the most fastidious gamers. Also, the developers tried to decorate the game visually and emphasize its style.
‹
›
Home
View web version