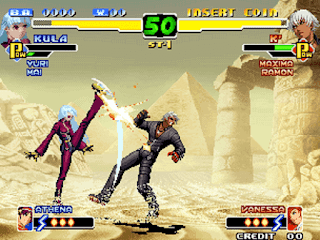 Genre: Action
Perspective: Side view
Visual: 2D scrolling
Art: Anime / manga
Gameplay: Arcade, Fighting
Narrative: Martial arts
Published by: SNK Corporation
Developed by: SNK Corporation
Released: 2000
Platform: Neo-Geo
The style of play is well expressed here. In total, there are thirty-four characters in it. Each one stands out not only for a set of original techniques, but also for his own gait. The graphics of the game have become more beautiful. The blurry textures are no longer so noticeable. The color palette has clearly grown. The original stages are full of bright colors.
‹
›
Home
View web version