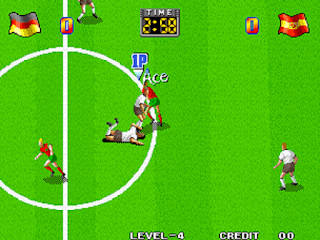 Genre: Sports
Perspective: Bird's-eye view
Visual: 2D scrolling
Sport: Football (European) / Soccer
Published by: SNK Corporation
Developed by: SNK Corporation
Released: 1992
Platform: Neo-Geo
Football is the most popular sport in the world. Therefore, this game is dedicated to him. Here you can choose one of the game modes: vs mode or SNK cup. Twelve teams from different countries will be nominated for the cup. Unfortunately, there is no Russian team here. There is also a thirteenth super command in vs mode. The best players in the world play for it. The playing fields look very large. Scoring a goal is not so easy, as the goalkeepers do their job well. Players perform some deceiving moves in order to get around the enemy. The footballers' movements look a little stiff and angular. And in general, the players, as in other projects of this genre, perform sweeps and push in order to get hold of the ball.
‹
›
Home
View web version