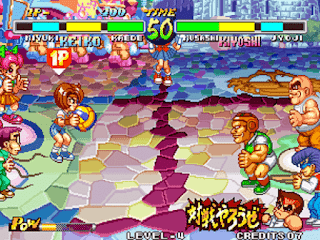 Genre: Action, Sports
Perspective: Bird's-eye view
Visual: 2D scrolling
Art: Anime / manga
Sport: Dodgeball
Published by: American Technos Inc.
Developed by: Technos Japan Corp.
Released: 1996
Platform: Neo-Geo
Fans of original games will love this project. Seven teams are involved here. Three people are speaking from each. The meaning of the game is very simple. On the site, two teams meet on opposite sides of each other. The goal of each of them is to throw the ball with such force at the opponent that he could not catch him in his hands. Each player has a life bar, which decreases in case of an unsuccessful catch of the ball. When it ends completely, the loser stands around the enemy's territory and tries to help his team from there. Each team has its own tactics and special attacks. This game is quite challenging. You need to have a good reaction to pass it to the end. The graphics of the game are quite beautiful, special attacks look especially impressive.
‹
›
Home
View web version