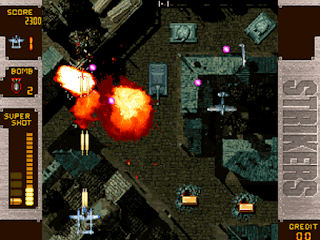 Genre: Action
Perspective: Top-down
Gameplay: Arcade, Shooter
Setting: World War II
Published by: Psikyo
Developed by: Psikyo
Released: 1999
Platform: Neo-Geo
The game belongs to the shooting / fly genre. It is dedicated to the final battles of the Second World War, which were distinguished by the particular brutality of the battles. You fly one of seven aircraft to choose from. The game is oversaturated with various types of military equipment that seeks to destroy you. The atmosphere is filled with beautiful explosions and destruction. Your plane uses many different weapons to fight enemies. An indicator is displayed on the screen that shows when special attacks can be used. The whole game takes place against the backdrop of beautiful landscapes. At the end of each mission, you will have to fight large-scale various bosses. The game is complicated by a large number of enemies and high dynamics of control.
‹
›
Home
View web version