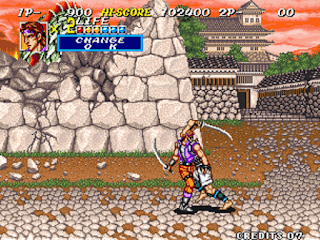 Genre: Action
Perspective: Side view
Gameplay: Arcade, Beat 'em up
Setting: Fantasy
Published by: SNK Corporation
Developed by: SNK Corporation
Released: 1993
Platform: Neo-Geo
The world evil from the past has risen again and you need to destroy it. Once again, you are empowered with the possibility of transformation. Several different shapes can now be used. When embodied in each, the main character has various attacks. The physics of the game has changed markedly. Now your opponents can be cut into two halves. The stages have become more beautiful and added to the dynamics of events. All battles are well drawn and from this they look very impressive. In addition, you can mount a horse and ride it, while simultaneously destroying enemies. The game is filled with a strict set of cold colors, a characteristic Sengoku atmosphere.
‹
›
Home
View web version