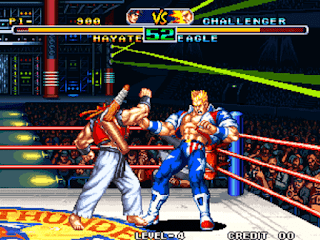 Genre: Action
Perspective: Side view
Art: Anime / manga
Gameplay: Arcade, Fighting
Published by: SNK of America
Developed by: SNK Corporation
Released: 1995
Platform: Neo-Geo
There are ten different fighters to choose from. Each has its own set of moves and attacks. In this game, the developers have tried to create interactive stages. On each one you can jump from one plane to another or cling to something (for example, pipes). From this, the arenas look voluminous. Not many games of the fighting genre show this. In addition, many items in stages can be destroyed. It brightens up the game. The graphics core of Savage Reign is far from weak. Large figures of fighters are located close in front of the player's eyes. This is just a plus for the game. Each technique is accompanied by not bad special effects. Interactive stages are harmoniously combined with the fights of the fighters.
‹
›
Home
View web version