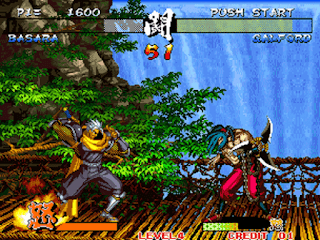 Genre: Action
Perspective: Side view
Visual: 2D scrolling
Art: Anime / manga
Setting: Fantasy
Narrative: Martial arts
Published by: SNK of America
Developed by: SNK Corporation
Released: 1995
Platforms: Neo-Geo, PlayStation (PSX, PS1)
In the third part of Samurai Shodown, there are minor changes in terms of graphics. There were twelve fighters. Each one added in the dynamics of movements and in drawing. Battles take place in new unusual stages, which are distinguished by shadow coloring. Added the ability to select a fighter's costume. You can also choose a mode of difficulty that is convenient for yourself. The fighters have acquired several new techniques and movements.
‹
›
Home
View web version