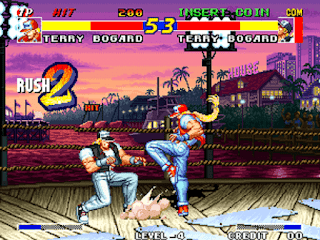 Genre: Action
Perspective: Side view
Visual: 2D scrolling
Art: Anime / manga
Gameplay: Arcade, Fighting
Narrative: Martial arts
Published by: SNK of America
Developed by: SNK Corporation
Released: 1996
Platform: Neo-Geo
This game is dedicated to such a popular genre as fighting. The best fighters come together to determine who is the best. There are sixteen of them in total. Each has its own unique abilities and skills. Also, all fighters have special attacks that accumulate during the battle. Much attention has been paid to creating the stages where the battles take place. Their design delights the player's eye. Fighters can move in two planes. During the battle, you can even knock the enemy out of the arena, effectively breaking some kind of fence. At each stage, you will have to fight several opponents. This significantly complicates the ability to complete the game.
‹
›
Home
View web version