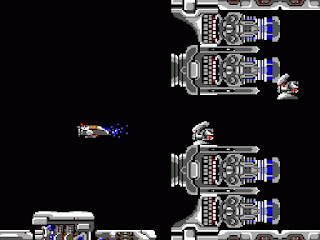 Genre: Action
Perspective: Side view
Visual: 2D scrolling
Gameplay: Arcade, Shooter
Vehicular: Space flight
Setting: Sci-fi / futuristic
Published by: SEGA of America
Developed by: Irem Corp.
Released: 1988
Platforms: SEGA Master System (MS), TurboGrafx-16 (TG-16), Arcade Machine
Port from the arcade machine to the Sega Master System. The galaxy is in great danger! The evil Bydo empire is approaching our galaxy to invade and conquer our beloved planet! There is only one hope. You were chosen as a pilot in an experimental R-9 spaceship, or a space fighter with a nuclear installation, to make it clearer. And you must stop the invasion of alien creatures.
‹
›
Home
View web version