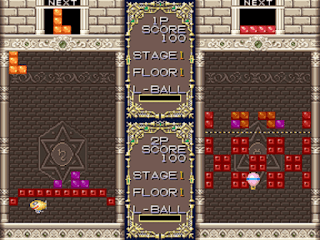 Genre: Puzzle
Visual: Fixed / flip-screen
Pacing: Real-time
Gameplay: Falling block puzzle
Published by: SNK Corporation
Developed by: SNK Corporation
Released: 1991
Platform: Neo-Geo
Sadistic variation on the theme of Tetris. Quite rare, quite valuable. Briefly about the plot. The Sun God erected a gigantic tower between the "village of women" and the "village of men", who almost killed each other in a great battle. In addition to the "peacekeeping" function, the tower has one more advantage. An unpleasant property. After all, it was she who blocked access to sunlight. For all. Therefore, two lethal means were equipped with the aim of reaching the top of the structure and appeasing / punishing the Sun God. Hmmm. Blocks must be destroyed, building a solid line, destroyed quickly. What for? Yes, at least then, so that the airship (the personification of the player in the Puzzled world), locked in a kind of cage, could freely soar up to the next floor of the tower. In addition: the more blocks are destroyed, the higher the "explosive scale", which allows the use of ball lightning, destroying everything around. According to good arcade tradition, the difficulty is smeared throughout the game and, for example, the seventh level may be much more difficult than the thirty-third. An absurd plot, ugly, but neat graphics ... However, addictive gameplay, coupled with puzzling complexity, are quite capable of delighting fans of the genre. Hurry Up! Fun Fact: Puzzled is the smallest Neo Geo game ever. So small that SNK even hesitated to mention the cartridge's bit size on the cover.
‹
›
Home
View web version