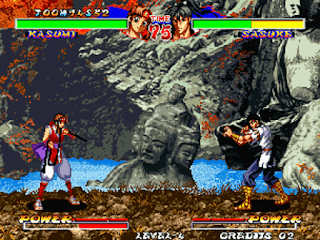 Genre: Action
Perspective: Side view
Gameplay: Arcade, Fighting
Published by: SNK Corporation
Developed by: ADK Corporation
Released: 1996
Platform: Neo-Geo
A beautiful and atmospheric game. You can fight both with your bare hands and with the help of weapons that can be obtained at any time. There is such a nice element of late 2D fighting games as the ability to push off in a jump from the edge of the screen. Smooth animation of movements, picturesque backgrounds. The game is fast, yet you are a ninja, not a sumo wrestler. There are special desperado moves that do a lot of damage when you're low on health. Minor downsides are long keyboard shortcuts for super moves and rather high complexity.
‹
›
Home
View web version