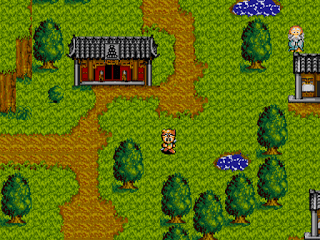 Genre: Role-Playing (RPG)
Perspective: Bird's-eye view
Visual: 2D scrolling
Pacing: Turn-based
Setting: Fantasy
Published by: Super Fighter Team
Developed by: Gamtec Corp.
Released: 2008
Platform: SEGA Genesis / Mega Drive
After putting the finishing touches on his new time machine, the prestigious Dr. Tang steps back to admire his life's work only to see it vanish before his very eyes. Waking up hundreds of years in the past, the doctor's young and careless neighbor soon realizes the shocking mistake he made while playing around in the laboratory. Pursued by hordes of fierce demons, will he survive long enough to retrieve the time machine and return home?
During the course of the adventure, players take control of a young, monkey-faced boy named Wukong who goes in search of his time machine in order to return to the year 1996. Along the way he is joined by Pigsy, a man-pig hybrid, and Wujing, a kind and beautiful young girl.
Legend of Wukong is a Chinese-made role-playing game in Japanese style. The game's story and characters are loosely based on the classic Chinese novel Journey to the West. The gameplay follows the Japanese template, with a party of heroes roaming a top-down world map, visiting towns and hostile areas, and fighting enemies in turn-based combat using either regular attacks or magic. (MobyGames)
‹
›
Home
View web version